Greatest Jobs Dogs have Done for us 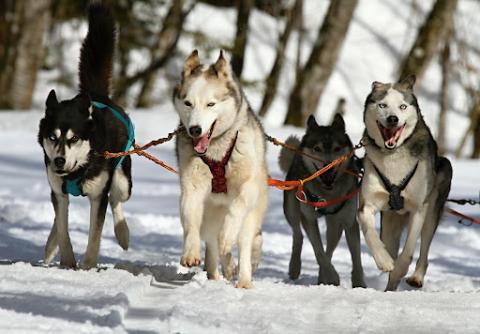 Since dogs were first domesticated over 14000 years ago, humans and dogs have teamed up to better both species. From the early days of dogs following humans around to scavenge their food to today, where dogs are a staple in society, the role of our domesticated canines has been a large part of our development as a species.

While today most dogs are simply pets and companions, it wasn’t always this way. Every culture and region has had different tasks that dogs were bred and trained to perform. Some of which are pretty fascinating.

One of the better-known jobs is dog sledding, and that’s for a good reason. Sled dogs have been used for thousands of years, although the oldest archaeological evidence is around 1000 A.D., it is commonly believed sled dogs have been used for longer than that. Initially developed by the Inuit tribes of Canada, it became widely used by the colonies of North America before spreading to Europe, where Sled Dogs played an essential role in discovering the North and South poles.

Maybe more significantly, sled dogs played a key factor in saving children during the 1925 Serum Run to Nome, Alaska. While the run had many heroic mushers, Leonhard Seppala and his lead dog Togo may be the most notable. Togo and Seppala traveled the largest distance of the run (261 miles), including traversing the incredibly dangerous Norton Sound, where Togo famously had to swim through the water of the cracked ice to pull his team to safety.

The run was not without controversy though, the dog who famously gained most of the credit was Balto, another of Seppala’s dogs who he thought very low of as a racer. Gunnar Kaasen led the team of 13 of Seppala’s backup race dogs and benefited from leading the final leg of the serum run. Unfortunately, Balto received all of the recognition from the newspapers, which went as far as fabricating him as the lead dog of his team due to his name being more remarkable than the actual lead dog, Fox. Seppala was heartbroken after Balto received all of the recognition in the years to follow, having witnessed Togo’s lifesaving heroism firsthand.

For thousands of years, dogs have been used to watch after children. For example, the oldest dog breed of the Americas, the Xoloitzcuintli, was often used as a shepherd to watch over children by the Aztecs and other native tribes of Mexico. Similarly, one of the many purposes of the Native American Indian dog, a breed that has been recreated today despite European settlers wiping out the original population, was to watch over the children of Native American tribes.

In the early 1900s, dogs like St. Bernards and Newfoundlands were often used as “nanny” dogs. Staffordshire Bull Terriers have also been referred to as “nanny dogs”; however, the origin of this is somewhat controversial. Some supporters believe they were bred for this purpose. They argue they have been referred to as “nanny dogs” since the early 1900s. However, there is no literature to back this up, as the earliest recorded reference to this is in the 1970s and was referring to present times. Nevertheless, the view of Staffordshire Bull Terriers as an overly aggressive and dangerous breed is certainly not the case, and they very much could have been “nanny dogs” in a similar fashion to St. Bernards and Newfoundlands.

One of the more impressive feats dogs have accomplished would have to be their water rescue ventures. Since the 1800s, there have been numerous reports of Newfoundland dogs rescuing drowning humans. From being part of rescues of as many as 160 people to saving Napoleon Bonaparte after he escaped from exile on the isle of Elba.

Another one of the heroic jobs dogs have done for us is serving in our military and police forces. While dogs have been used in wars since 700 B.C. and probably longer, the history of military dogs in the United States goes back to WWI. Since then, dogs have been an integral part of our military, saving thousands of lives.

In Vietnam, dogs saved over ten thousand lives. However, the dog handlers would tell you the number is much greater than that. Tragically, the US government decided to thank those dogs for their service by deeming them as expendable. When the US pulled out of Vietnam, Military Generals did not allow most dogs to leave, even forbidding the dog's handlers from paying for their flights home, leaving an everlasting stain on the “leave no one behind” creed. Only 200 of the thousands of dogs made it out of Vietnam to the disgust of the handlers, veterans, and the public. Thankfully, this led to the passing of “Robby’s Law” in the year 2000 that allowed military dogs to be transferred or adopted.

Perhaps the most significant thing dogs have ever done for us is be our best friends. From the beginning of our written human history to today, where dogs are a focal point of many households, our furry companions have given us unconditional, judgment-free love and affection.

It’s always crucial that we give them the same back. It’s easy to get caught up in the busyness of our everyday lives. As dog owners, we will often have multiple dogs that make up important parts of our life. But for those dogs, we are their whole life.